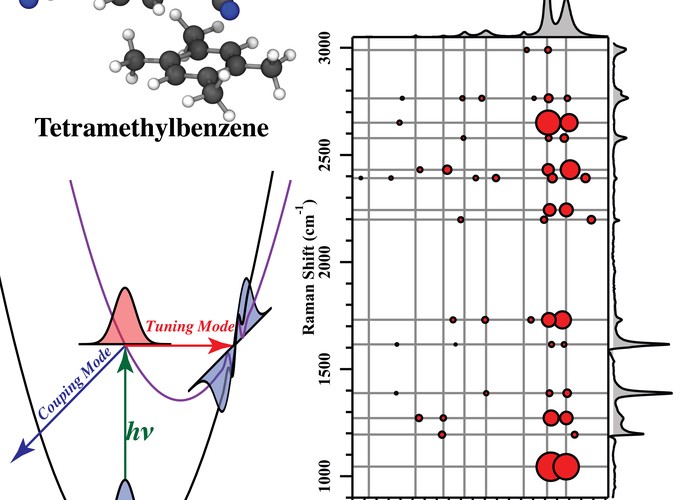 Counter-clockwise from top left: molecular model of the TCNQ:TMB system; a simplified potential enegery surface for the reaction projected along the purported tuning and coupling modes; and a 2D-FSRS map showing the coupling strength between the various normal modes of the system.

Photochemical reactions are mediated by conical intersections (CI), which are difficult to directly probe and characterize. To gain insight into CIs, two-dimensional femtosecond stimulated Raman spectroscopy (2D-FSRS) is used to examine a model excited-state charge-transfer (CT) complex consisting of an electron donor, tetramethylbenzene (TMB), and an acceptor, tetracyanoquinodimethane (TCNQ). Following impulsive excitation, the excited-state transient absorption reveals large-amplitude excited-state wave packet motion along low-frequency modes, in particular TCNQ’s totally symmetric 323 cm$^{–1}$ CCN bend, which persist for ∼5 ps. These low-frequency coherences modulate the intensity and peak frequencies of the excited-state FSRS vibrational spectra. In particular, large-magnitude oscillations at 323 cm$^{–1}$ are observed in the peak frequency (Δω = 2 cm$^{–1}$) and intensity (ΔOD = 1.5 mOD) of the nontotally symmetric 1271 cm$^{–1}$ C=C rocking mode. The magnitude of these oscillations is analyzed to determine the first-order anharmonic coupling between the high- and low-frequency degrees of freedom in the excited state. The anharmonic coupling between the totally symmetric 323 cm$^{–1}$ and the nontotally symmetric 1271 cm$^{–1}$ modes is estimated to be in excess of 50 cm$^{–1}$, strongly suggesting that they are the tuning and coupling modes, respectively, for the CI that connects the CT excited state to the neutral ground state and controls charge recombination internal conversion.